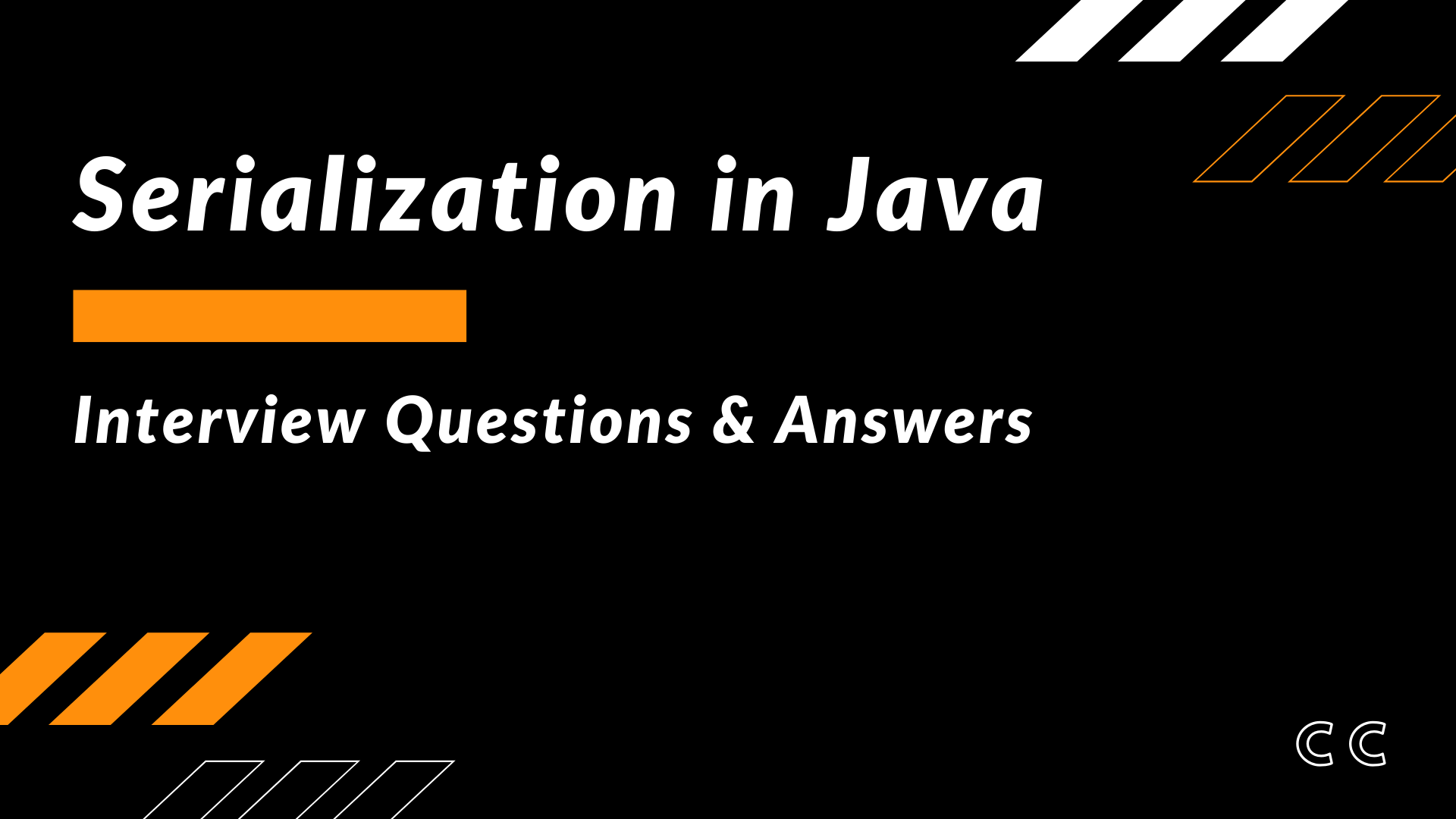 Q1. What is Serialization in Java?

Q2. How to make a Java class Serializable?

Q4. What is the need of Serialization?

Ans) The serialization is used :-

Q5. Do we need to implement any method of Serializable interface to make an object serializable?

Ans) No. Serializable is a Marker Interface. It does not have any methods.

Q6. Are the static variables saved as the part of serialization?

Ans) No. The static variables belong to the class are not the part of the state of the object so they are not saved as the part of serialized object.

Q7. What is the purpose of Serialization?

Answer: Serialization is usually used when the need arises to send your data over network or stored in files. By data I mean objects and not text. Now the problem is your Network infrastructure and your Hard disk are hardware components that understand bits and bytes but not Java objects. Serialization is the translation of your Java object’s values/states to bytes to send it over network or save it.

Q8. How to serialize an object in Java?

Answer: For a class to be serialized successfully, two conditions must be met:

The class must implement the java.io.Serializable interface.

All of the fields in the class must be serializable. If a field is not serializable, it must be marked transient.

So if you want a class object to be serialized, all you need to do is implement the java.io.Serializable interface. It just informs the compiler that this java class can be serialized. You can tag properties that should not be serialized as transient. You open a stream and write the object into it. Java API takes care of the serialization protocol and persists the java object in a file in conformance with the protocol. De-serialization is the process of getting the object back from the file to its original form.

When serializing an object to a file, the standard convention in Java is to give the file a .ser extension.

Q9. Is it necessary to implement Serializable interface if you want to serialize any object?

Q10. Can you Serialize static variables?

Q11. How can you avoid certain member variables of class from getting Serialized?

Q12. Difference Between Serializable And Externalizable Interface In Java?

Externalizable provides writeExternal() and readExternal() methods which gives flexibility to override java serialization mechanism instead of using on default serialization.

Q13. Is Serializable A Marker Interface In Java?

Answer : Yes. It has no methods.

Q14. What Is Serialversionuid In Java?

Q15. How do you serialize an object using Serializable interface?

Below example shows how an instance of an object can be serialized. We are creating a new Rectangle object and serializing it to a file Rectangle.ser.

Q16. When will you use Serializable or Externalizable interface? and why?

Answer: Most of the times when you want to do a selective attribute serialization you can use Serializable interface with a transient modifier for variables not to be serialized. However, the use of the Externalizable interface can be really effective in cases when you have to serialize only some dynamically selected attributes of a large object.

Let’s take an example, Some times when you have a big Java object with hundreds of attributes and you want to serialize only a dozen dynamically selected attributes to keep the state of the object you should use Externalizable interface writeExternal method to selectively serialize the chosen attributes.

In case you have small objects and you know that most or all attributes are required to be serialized then you should be fine with using Serializable interface and use of transient variable as appropriate.

Q17. What would happen if the SerialVersionUID of an object is not defined?

Q18. What are Transient and Volatile Modifiers

Volatile modifier applies to variables only and it tells the compiler that the variable modified by volatile can be changed unexpectedly by other parts of the program.

Q19. Can a Serialized object be transmitted through network?

Q20. What is transient variable in Java?

Q21. What are the compatible and incompatible changes in Java Serialization Mechanism?

Q23. While serializing you want some of the members not to serialize? How do you achieve it?

Another frequently asked Serialization interview question. This is sometime also asked as what is the use of transient variable, does transient and static variable gets serialized or not etc. so if you don’t want any field to be part of object’s state then declare it either static or transient based on your need and it will not be included during Java serialization process.

Q24. Suppose super class of a new class implement Serializable interface, how can you avoid new class to being serialized?

Answer: Using the custom serialization you can provide definition of writeObject method where you can throw NotSerializableException.

Q25. Is constructor of super class called during DeSerialization process of subclass (Important)?

Answer: It is depends on whether our superclass has implemented Serializable or not.

If superclass has implemented Serializable – constructor is not called during DeSerialization process.

If superclass has not implemented Serializable – constructor is called during DeSerialization process.

Q26. what is use of serialization in java?

Persist data for future use.

Send data to a remote computer using such client/server Java technologies as RMI or socket programming.

“flatten” an object into array of bytes in memory.

Exchange data between applets and servlets.

Send objects between the servers in a cluster.

Q27. If we have a Serializable class “MyClass” which extends “MySuperClass”. What happens to the properties of “MySuperClass”, when we serialize/de-serialize “MyClass”?

Q28.  What code would you use in a shell script to determine if a directory exists?

The UNIX test command with the -d option can be used to determine if a directory exists.

The following test command expression would be used to verify the existence of a specified directory, which is stored in the variable $mydir:

If the value stored in the variable mydir exists and is a directory file, the command(s) located between then and fi will be executed.

You can consult the test command’s man page (“$ man test”) to see what test command options are available for use.

Q29. Within a UNIX shell scripting loop construct, what is the difference between the break and continue?

Ans: The Perl shift array function adds a new element at the start of an array.

Ans: The Perl pop array function removes the last element of an array.