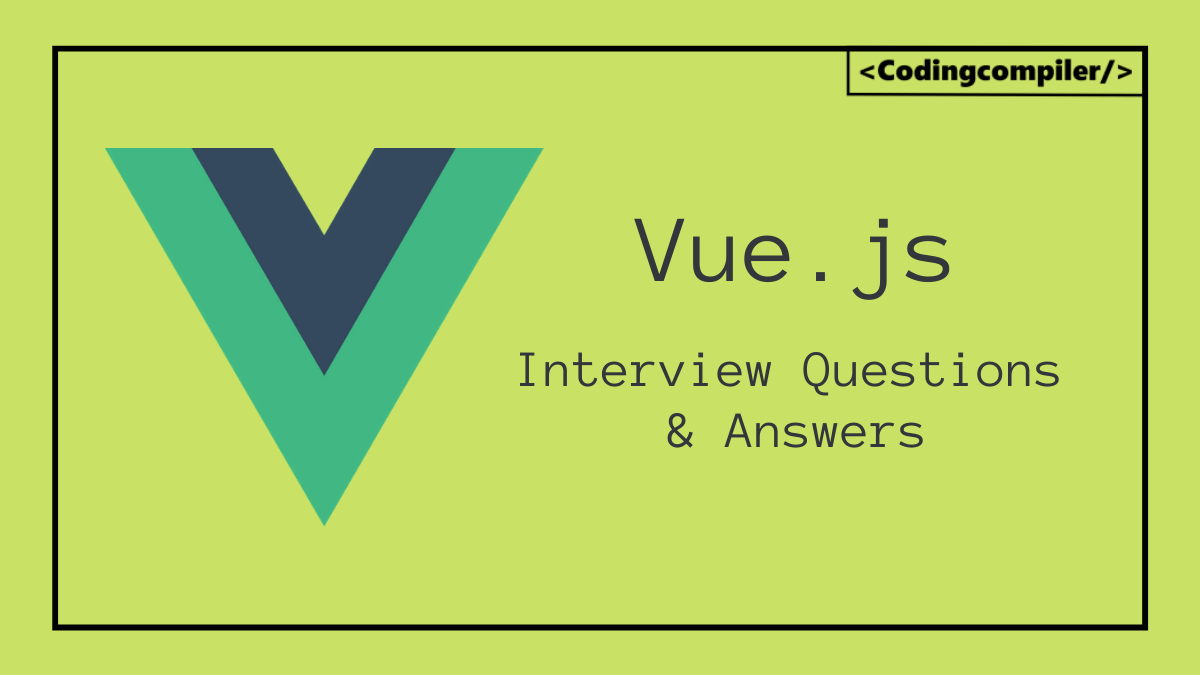 In this article, you’ll learn

Answer: Vue is a progressive framework used to building user interfaces.The core library is focused on the view layer only, and is easy to pick up and integrate with other libraries or existing projects.


2. What is the advantages of Vue.js?

Answer: Following are the advantages of using Vue.js.

3. What is the difference between computed properties and methods?

When we have to compute something by doing lot of computations like looping through a large array, it is best to use computed properties instead of a method. Without caching, we would spend more time than necessary. When we do not want cache, we can use a method instead.

Answer: All properties defined in a Vue instance’s data option are reactive, meaning that if they change, the component is automatically updated and re-rendered as needed.

All such properties are converted to getters and setters during initialization, thus allowing Vue to detect when those properties are accessed or changed.

The following limitations must be accounted for when designing a Vue app:

Vue cannot detect object property addition or deletion due to a JavaScript limitation, so the Vue.set method must be used to add new root-level reactive properties.

Similarly, Vue cannot detect when an array item is modified using an index. Vue.set must be used here as well.

5. What are mixins? Describe their benefits and drawbacks.

Answer: Mixin support is a feature that allows code reuse between components in a Vue.js application and a software composition tool.

Mixins help with following the DRY (don’t repeat yourself) principle. A mixin can even be applied globally to every component instance. In that case, it’s called a global mixin.

Mixins are a powerful tool, but some caution is needed while using them. As with all injected code, we should be careful to avoid maintenance issues and unexpected behavior.

It helps to implement mixins using pure functions that don’t modify anything outside their own scope.

Global mixins should be avoided, as affecting every single component can lead to maintenance issues as an application grows. Injecting specific mixins to components as needed leads to more maintainable code.

6. How to create an instance of Vue.js?

Every Vue application starts by creating a new Vue instance with the Vue function:

8. How to create Two-Way Bindings in Vue.js?

In below example you can see how Two-Way Bindings is implemented.

9. How can you redirect to another page in Vue.js?

11. List the most common cause of memory leaks in Vue.js apps and how they can be solved.

Answer: Memory leaks in Vue.js applications often come from using third-party libraries that create their own instances and/or manipulate the DOM. The v-if directive and the Vue Router destroy Vue component instances; however, cleaning up after any third party library should be done manually in the beforeDestroy() lifecycle hook.

For example, let’s say we use a fictional library, PowerGraph.js, inside our component. It creates a graph instance that displays some data on the page:

We need to call the graph instance’s destroy() method if it’s provided or implement our own cleanup method:

If cleanup is not done before our component gets destroyed, then that memory is never going to be released. Hence, a memory leak.

Answer: Similar to $root, the $parent property can be used to access the parent instance from a child.

Although it provides direct access, it makes the application hard to test and debug. And we can not easily find out the where the mutation come from.

Vue also provides $child just like $parent, but it can be used to access the child instance.

Answer: When you pass a plain JavaScript object to a Vue instance as its data option, Vue will walk through all of its properties and convert them to getter/setters using Object.defineProperty.

The getter/setters are invisible to the user, but under the hood they enable Vue to perform dependency-tracking and change-notification when properties are accessed or modified.

Every component instance has a corresponding watcher instance, which records any properties “touched” during the component’s render as dependencies. Later on when a dependency’s setter is triggered, it notifies the watcher, which in turn causes the component to re-render.

15. What are filters in Vuejs?

Answer: Filters in Vue.jS helps in applying common text formatting. It is used in two places, mustache interpolations, and v-bind expressions. It mainly filters the data on the DOM level. So you get data that is still intact in the storage but is represented in the custom specified manner. It enhances the presentation of the view layer. The filters are also reusable. You can declare a filter globally and use it on any desirable component. It gives you the power to format your data at the view level.

16.  How to import js file in the Vue component?

There are two ways to import a JavaScript library to the Vue Component.

The second way is to include your external JavaScript file into the mounted hook of your Vue component.

Answer: In one-way data flow the view(UI) part of application does not updates automatically when data Model is change we need to write some custom code to make it updated every time a data model is changed.

In Vue js v-bind is used for one-way data flow or binding.

In two-way data binding the view(UI) part of application automatically updates when data Model is changed.

Answer: In Vue.js filters are used to transform the output that are going to rendered on browser.

A Vue.js filter is essentially a function that takes a value, processes it, and then returns the processed value. In the markup it is denoted by a single pipe (|) and can be followed by one or more arguments:

In Vue 2.0, there are no built-in filters are availables, however you are free to create your own filters.

19. What is VUE-resource, how can you install Vue Resource ?

Answer: VUE-resource is a plugin for vue.js that provides services for making web requests and handle responses using a XMLHttpRequest or JSONP

Answer:  Vue.js allows us to define filters that can be used to apply common text formatting. Filters are usable in two places: mustache interpolations and v-bindexpressions. Filters should be appended to the end of the JavaScript expression, denoted by the “pipe” symbol.

The Best Vue.jsInterview Questions And Answers

21. What do we call in a server-side rendered Vue App?

Answer: “Universal” or “isomorphic” can describe a server-rendered Vue.js app. This means that the codes of the majority of the applications run on both the client and the server.

22. What is the matching by dynamic route?

Answer: Matching by dynamic route is a dynamic segment in a route which is denoted by a colon “:”. This allows for dynamic value being passed in a route. This is usually used when passing on a specific ID on the route.

Answer: E2E (end-to-end) testing is a type of functional test. Unlike a unit test, you’re not breaking the application down into smaller parts in order to test it – you’re testing the entire application.

Answer: The CLI ( @vue/cli ) is a npm package that is installed globally. Vue command is provided by CLI in you terminal. The ability to scaffold quickly a new project thru vue create or a prototype of new ideas can be created via the reserve.

Answer: In Vue js following types of directives are available

26. Why should not use if and for directives together on the same element?

Answer: It is recommended not to use v-if on the same element as v-for. Because v-for directive has a higher priority than v-if. There are two common cases where this can be tempting:

To filter items in a list (e.g. v-for=”user in users” v-if=”user.isActive”). In these cases, replace users with a new computed property that returns your filtered list (e.g. activeUsers).

To avoid rendering a list if it should be hidden (e.g. v-for=”user in users” v-if=”shouldShowUsers”). In these cases, move the v-if to a container element (e.g. ul, ol).

Answer: Mixins allow us to write pluggable and reusable functionalities for Vue components. If you have a set of component options such as lifecycle hooks, methods etc. that you wish to reuse across multiple components, you can write it as a mixin and simply reference it in the component. The contents of the mixin are then merged into the component. If you’re defining any lifecycle hooks in the mixin, then it would get execution precedence over the component’s own hooks.

Answer: The Document Object Model or DOM defines an interface that allows languages such as JavaScript to access and manipulate an HTML document. Elements are represented by nodes in a tree and the interface allows us to manipulate them. This interface, however, comes with a cost and a large number of very frequent DOM operations will slow down the page.

Vue solves this problem by implementing a virtual representation of the document’s structure in memory where a virtual node (VNode) represents nodes in a DOM tree. When manipulation is needed, instead of performing it on the real DOM, the calculations and operations are performed in memory on the Virtual DOM. This is naturally faster and allows the Virtual DOM algorithm to compute the most optimised way to update the actual DOM structure.

Once this computed, it is applied to the actual DOM tree. This boosts performance and is the reason why Virtual DOM based frameworks such as Vue and React have gained so prominence.

30. What is the recommended way to manage state in a large Vue application and why?

Answer: When an application grows in size, both in terms of features and codebase, managing state becomes difficult and using an endless network of downstream props and upstream events is certainly not a wise decision. In such a situation, it becomes necessary to offload state management to a central management system. The Vue ecosystem offers Vuex which is the official state management library and also a recommended pattern for storing state centrally.

Vuex allows maintenance of a central state. Components use Vuex as a reactive data store and update when the state updates. Multiple and non-related components can depend on the same and central state store.

In this case, Vue acts as a pure View layer. To modify the state, the view layer (such as a button or an interactive component) needs to issue a Vuex ‘Action’, which then does the desired task. To update or mutate the state, Vuex offers ‘Mutations’. An action commits a mutation and only then the state updates.

The purpose of this workflow is to leave a trail of operations that can be used/audited.

31. Why is Vue JS better than Angular?

Answer: The absence of pedigree is probably the greatest benefit of using VUE.JS rather than Angular JS. VUE.JS is also extremely lightweight, user-friendly, and easy to learn. If your requirement is a single page and lightweight web application, then no doubt VUE JS is the best choice. Speed and performance will also be considered in favor of VUE.JS when compare to Angular.

32.  How to redirect to another page in Vue.js?