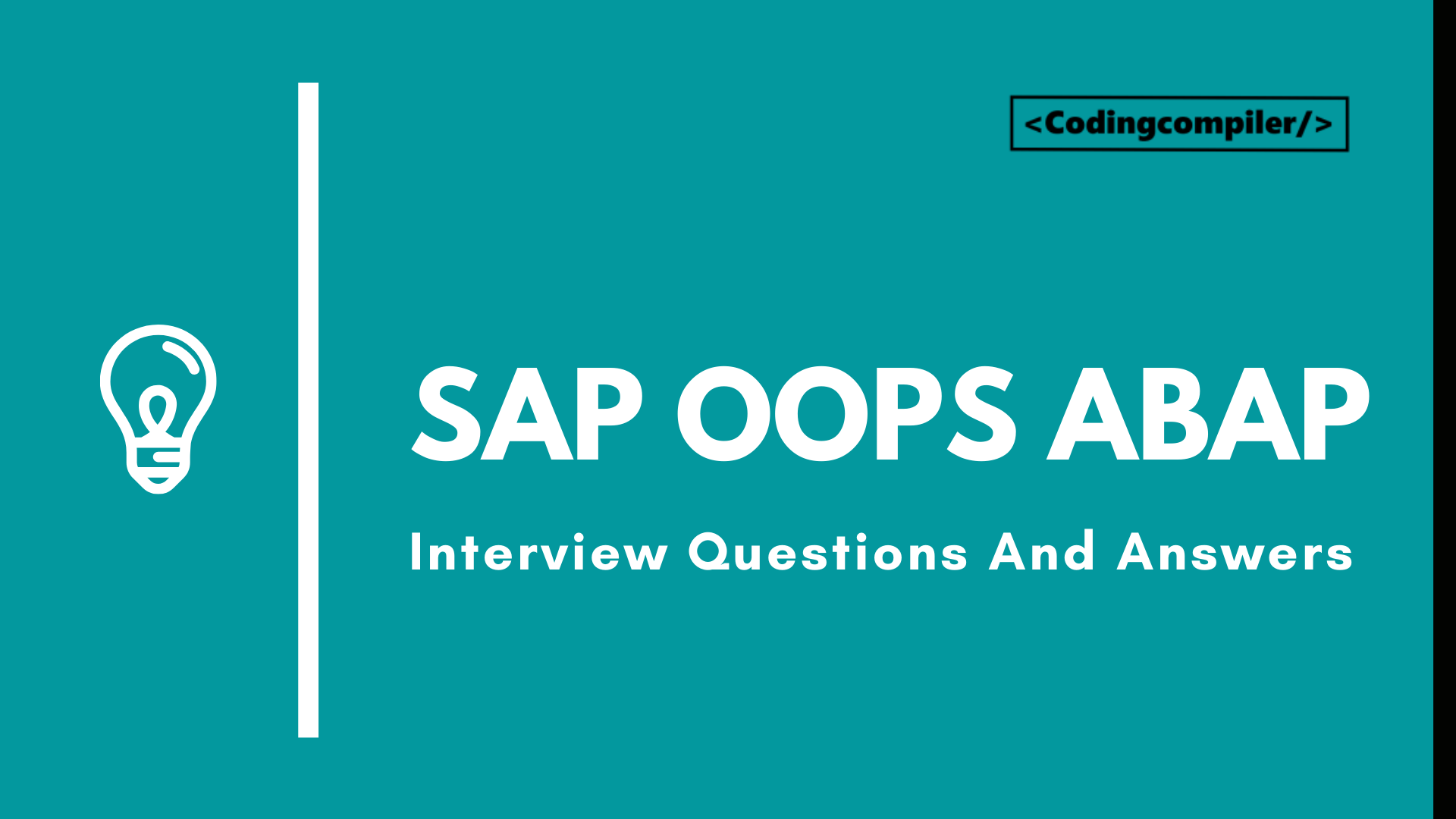 In this article you’ll learn

1. What is the concept of Object-Oriented ABAP?
2. What is OOPS ABAP ?
3. What is an Interface in OOABAP?
4. Is It Mandatory To Implement All Methods Of Interface In The Class Which Includes Interface?
5. What Is An Interface In Ooabap?
6. Can We Instantiate The Interface?
7. Can We Achieve Multiple Inheritance Using Interfaces?
8. What is the Difference between Class and Object?
9. How can polymorphism be implemented?
10. What is a reference variable?

1. What is the concept of Object-Oriented ABAP?

Answer: Object Oriented ABAP came up with the concept of representing Real-Time objects in classes. Ex: Instances at run time.

Answer: Object orientation (OO), or to be more precise, object-oriented programming, is a problem-solving method in which the software solution reflects objects in the real world.

3. What is an Interface in OOABAP?

4. Is It Mandatory To Implement All Methods Of Interface In The Class Which Includes Interface?

5. What Is An Interface In Ooabap?

6. Can We Instantiate The Interface?

Answer: No, we can not instantiate interface using create object keyword.

8. What is the Difference between Class and Object?

Answer: A Class is actually a blueprint or a template to create an Object. Whereas an Object is an actual instance of a Class.

9. How can polymorphism be implemented?

10. What is a reference variable?

11. What are the limitations of redefining a method?

12. What Is The Difference Between Abstract Class And Interface?

13. What is Method Overriding?

Answer: Method overriding allows a subclass to override a specific implementation of a method that is already provided by one of its superclasses.

A subclass can give its own definition of methods but need to have the same signature as the method in its superclass. This means that when overriding a method the subclass method has to have the same name and parameter list like the super class’s overridden method.

14. Can we instantiate the interface?

Answer: No, we can not instantiate interface using create object keyword

Answer: Method overloading is in a class have many methods having same name but different parameter called overloading or static polymorphism

Answer: Aggregation is a special form of association. Aggregation is the composition of an object out of a set of parts. For example, a car is an aggregation of engine, tyres, brakes, etc.

Aggregation represents a “Has” relationship like a car has a engine.

17. What is object-oriented programming language ?

18. What Are The Advantages Of Oo Alv?

Answer: Some of the main advantages of Object Oriented ALV

We have no events available in the classes when compared to ALV with function modules which give flexibility for the programmer to develop ALV’S for various scenarios.

We can display more than one ALV grid data on a single screen.

We can also place different UI elements like checkbox, Radiobutton on the same screen in addition to ALV grid data.

19. What are the core ABAP oops concepts ?

Inheritance is the ability of an object to inherit the properties and methods of another object. This characteristic leads to the creation of families of objects (just like families exist for humans) with parent objects and child objects.

Polymorphism is about an objects ability to provide context when methods or operators are called on the object. In object-oriented programming, polymorphism (from the Greek meaning “having multiple forms”) is the characteristic of being able to assign a different meaning to a particular symbol or “operator” in different contexts. The simple example is two classes that inherit from a common parent and implement the same virtual method.

Encapsulation: Encapsulation is the ability that an object has to contain and restrict the access to its members. Encapsulation is a key concept of object programming that ensures the autonomy and integrity of the objects. Abstraction: Another OOPS concept related to encapsulation that is less widely used but gaining ground is abstraction.

Through the process of abstraction, a programmer hides all but the relevant data about an object in order to reduce complexity and increase efficiency. In the same way that abstraction sometimes works in art, the object that remains is a representation of the original, with unwanted detail omitted. The resulting object itself can be referred to as an abstraction, meaning a named entity made up of selected attributes and behavior specific to a particular usage of the originating entity.

20. What is an Interface in OOABAP?

Answer: UML (Unified Modeling Language) is a standardized modeling language. It is used for the specification, construction, visualization, and documentation of models for software systems and enables uniform communication between various users.

UML does not describe the steps in the object-oriented development process.

SAP uses UML as the company-wide standard for object-oriented modeling.

UML describes a number of different diagram types in order to represent different views of a system.

22. What is a reference variable?

23. What is the difference between Abstract method and a Final method ?

Abstract instance methods are used to specify particular interfaces for subclasses, without having to immediately provide implementation for them. Abstract methods need to be redefined and thereby implemented in the subclass (here you also need to include the corresponding redefinition statement in the DEFINITION part of the subclass). Classes with at least one abstract method are themselves abstract. Static methods and constructors cannot be abstract (they cannot be redefined).

Abstract (instance) methods are defined in the class, but not implemented

They must be redefined in subclasses.

24.  Is It Mandatory To Implement All Methods Of Interface In The Class Which Includes Interface?

25. What Is An Interface In Ooabap?

Answer: The interface is class which contains methods without implementations.

27. Does Polymorphism Achieved Through Interfaces?

Answer : Yes, by using interface concept in SAP ABAP, we can polymorphism

Answer: The widening cast is, as with inheritance, the opposite of the narrowing cast: Here it is used to retrieve a class reference from an interface reference.

Answer: If it is to be impossible to instantiate a class more than once (for example, because it serves as a data administrator or data container), you can use the singleton concept. The class is defined with the addition CREATE PRIVATE and FINAL and instantiated using its static constructor. A public static component could then make the reference to the class available to an external user.

30. What Are The Differences Local & Global Classes?

31. What are static components? What is a component selector ?

Answer: In inheritance, static components are “shared”: A class shares its non-private static attributes with all its subclasses. => and -> are the component selectors used to refer.

32. What Is The Difference In An Instance Method And A Static Method?

33. Can We Raise Events In Interface?