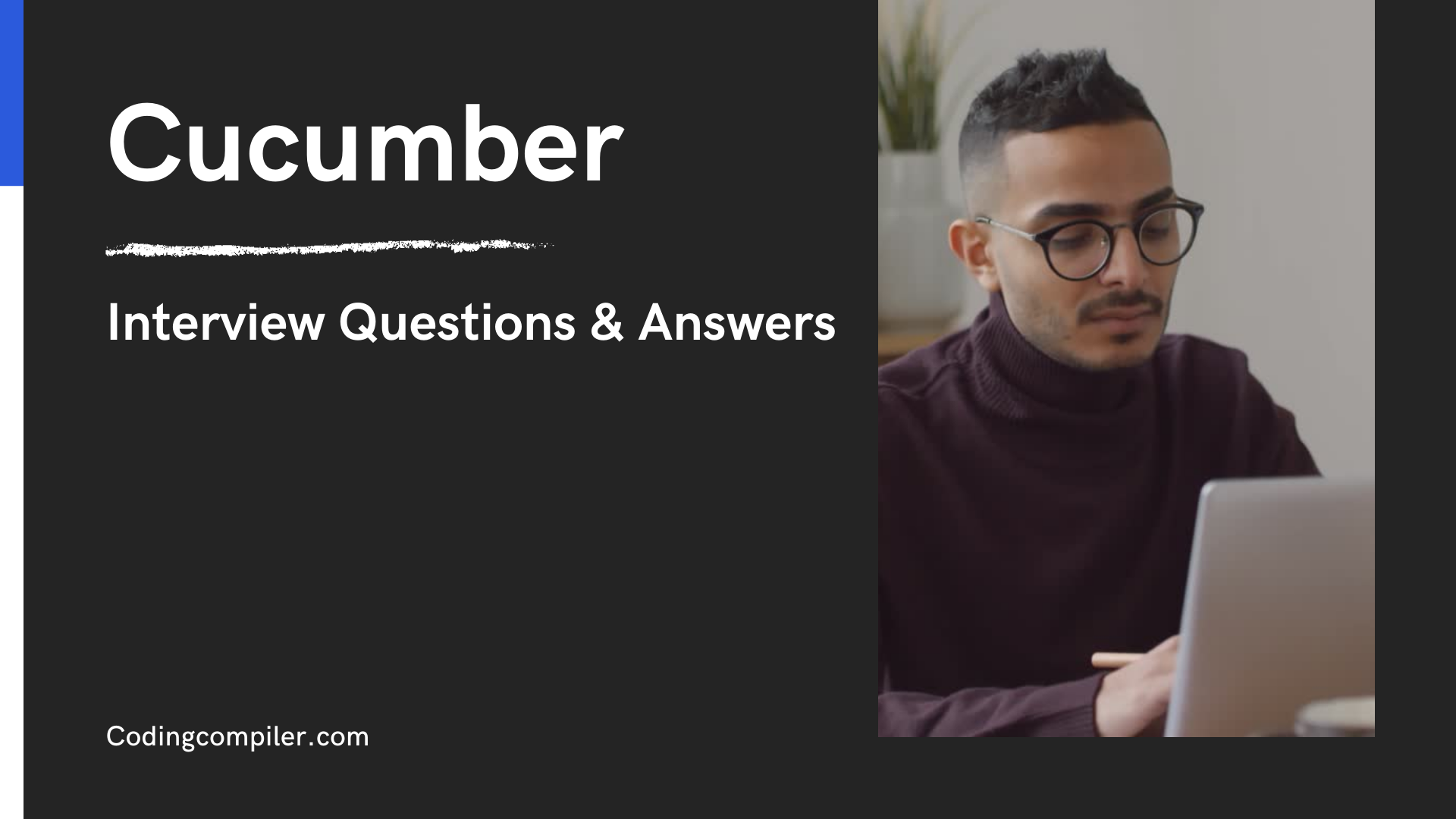 Cucumber Interview Questions And Answers for experienced professionals from Codingcompiler. These Cucumber interview questions were asked in various interviews conducted by top multinational companies across the globe. We hope that these interview questions on Cucumber will help you in cracking your job interview. All the best and happy learning.

In this Cucumber Interview Questions Blog, You Will Learn

Check Below For More Interview Questions And Answers

1. What is Cucumber and explain it?

Cucumber is an automation testing framework used to test the software applications easily without any programming skills and reduces the effort and increases the quality of testing. This is an open-source tool and supports plain English language specifications for the testing requirements. Other technical methods to use the programming languages are Java, .NET and other platforms. The cucumber specifications contain different scenarios and examples.

2. What language is used by Cucumber?

Ans:
Gherkin is the language that is used by the Cucumber tool. It is a simple English representation of the application behavior. Gherkin language uses several keywords to describe the behavior of applications such as Feature, Scenario, Scenario Outline, Given, When, Then, etc.

3. What are the different scenarios in the Cucumber tool?

The different scenarios used in Cucumber are 1. Given (some initial context) 2. When (an event occurs) 3. Then (ensure some outcomes). Scenarios will be initially described in natural language. The scenarios, when added with the definition of steps, will be called as Scenarios. The scenarios can be run individually or can be integrated with other features to test the integration functionalities. The scenarios in the Cucumber will be written by Gherkin syntax which is a language for writing Cucumber automation test specifications.

4. What is a test framework?

Answer: In general, a framework is an entity that binds several modules in a logical sequence to cover the end-to-end flows of an application. The objective of investing in a framework is to test a product that has a recurring roadmap and a regular release cycle.

5. What are the apparent advantages of a test framework?

Answer: The following are the possible benefits of using a test framework.

1- It reduces the complexity of using a variety of technologies inculcated in a product.
2- It organizes the unit and functional testing efforts of a developer and tester.
3- Provides early feedback on the quality of the code.
4- Helps in tracking test coverage as well as code coverage.
5- Results in easy debugging and reduces the chances of errors.

6. What is a profile in cucumber?

Answer: You can create Cucumber profiles to run a set of features and step definitions. Use the following command to execute a cucumber profile.

7. What are the features in Cucumber?

8. What is meant by a feature file?

9. What programming language is used by Cucumber?

Ans: Cucumber tool provides support for multiple programming languages such as Java, .Net, Ruby, etc. It can also be integrated with multiple tools such as Selenium, Capybara, etc.

10. Cucumber Execution Starts From Where?

Support is a foder where we can setup cucumber related support.
Env.rb file will be used to load the required libraries for cucumber scenario execution
hooks.rb we will add hooks like before, after, before step and after step hooks.

12. What is Scenario Outline in Cucumber?

This is the most asked cucumber interview questions. A scenario outline replaces an identifier with the actual value from the table. Each row can be considered as a scenario. A feature file is more time taking a task and is more error-prone in testing. The same feature file can be reduced to fewer lines for execution in the scenario outline feature to increase the efficiency and decreases the runtime.

13. What are the various keywords that are used in Cucumber for writing a scenario?

Ans: Mentioned below are the keywords that are used for writing a scenario:

14. What is the purpose of the Behaviour Driven Development (BDD) methodology in the real world?

Ans: BDD is a methodology to understand the functionality of an application in simple plain text representation.

The main aim of Behavior Driven Development framework is to make various project roles such as Business Analysts, Quality Assurance, Developers, Support Teams understand the application without diving deep into the technical aspects.

15. What Are Before, After, Beforestep And Afterstep Hooks?

16. What are the advantages of Cucumber?

The cucumber tests are written based on the user’s point of view. The scenarios in the testing will be covered by all the team members, product owners, business analysts, test analysts, developers etc., to implement the automation efficiently. The code reusability can be achieved. The primary advantage of Cucumber is its support of Behaviour Driven Development approach in testing. This tool helps in eliminating the gap between different technical and non-technical members of the team. It provides collaborative and inclusion with the team. Streamlining and artifacts will be in line with the project expectations and requirements. Adaptability will be high in case of major changes to the functional or behavioral requirements.

17. Explain about and, but keywords in Cucumber?

“And” is used to combine two or more same type of action.

Cucumber steps beginning with “And” or “But” are exactly the same as all other steps.

18. What do you mean by grouping in Cucumber?

You can create steps.rb file for each Major operation / Features instead of keeping all steps in a single file. This process is called a grouping.

19. What do you mean by tag in Cucumber?

Answer: Tags are the sticky notes you’ve put on pages you want to be able to find easily.

You tag a scenario by putting a word prefixed with the @ character on the line before the Scenario keyword.

You can attach multiple tags to the same scenario, separated with spaces.

21. What is the difference between cucumber, JBehave, and Specflow?

23. What is the language used to write a scenario in feature file?

Answer: Gherkin is a plain-text language used to write cucumber scenario in the feature file. Gherkin is a business readable, domain-specific language used to describe the behavior of software application from user’s perspective so that its easy for non-programmers to read and collaborate.

24.  What are the keywords used in Feature file?

25. WHAT IS BEHAVIOUR DRIVEN DEVELOPMENT (BDD)?

Answer: Behaviour Driven Development (BDD) is a methodology which uses the performance and behaviour of the application for its development.

26. CAN YOU NAME ANY OTHER BDD TOOL, EXCEPT CUCUMBER?

Answer: Some other BDD tools, except Cucumber, are as follows:

27. How can any scenario in the feature file be written?

Answer: The Cucumber test scenarios are written with the help of a very simple language in the feature file. This language is known as Gherkin. This simple programming language is also business readable. The behavior and how the software developmental process works are all described with the help of this language. It is specific to a particular domain of programming and all these are described from the perspective of a user. Hence, easy collaboration can be done by non-programmers too and can be easily read.

28. WHICH LANGUAGE USED IN CUCUMBER TO WRITE THE TEST?

29. WHAT ARE THE PROGRAMMING LANGUAGE SUPPORTED BY CUCUMBER?

30. Name any two testing frameworks that can be integrated with Cucumber?

31. Name any two build management tools that can be integrated with Cucumber?

32. What software do you need to run cucumber in JAVA?

33. Name any advanced framework design that can be used with Cucumber?

A test harness for Cucumber and rspec allows for separating responsibility between setting up the context and interacting with the browser and cleaning up the step definition files.

35. What are the differences between JBehave and Cucumber?

Answer: Although Cucumber and JBehave are meant for the same purpose, acceptance tests are completely different frameworks:

JBehave is pure Java Framework, and Cucumber is Ruby-based.

JBehave are based on stories while Cucumber is based on features.

36. In what ways does the Cucumber execution start? What are the variously advanced frameworks used with the Cucumber development tool?

Answer: Support is the place from where the execution of Cucumber test starts. The software which requires testing is mainly prioritized by the Cucumber software development tool. For the execution of the process of testing, the file gets loaded at first in Support and it is generally the env.rb file. Then the hooks.rb file gets loaded. Finally, the steps of the scenarios get executed from the feature file. Cucumber testing tool executes its work with the help of all these folders, commands and keywords. Support is considered to be very important in this respect.

The following are the advancement frameworks available with the Cucumber tools –

37. How to run Cucumber tests in parallel?

Answer: Parallel tests can be run in Cucumber using the Cucumber JVM Parallel Plugin that can be used with Serenity BDD. The plugin will search for feature files in under the src/test/resources directory. It will then make runners for each file.

38.What are the prereqs for building a Selenium Cucumber automation framework?

Answer: You might like to consider the following facts while creating a productive and scalable test framework:

39. What are the steps to generate a report in Cucumber?

We run the following command to produce HTML reports.

40. What is the right way to execute a specific scenario from the feature file?

We can select the target scenario from a feature file by providing its line number.