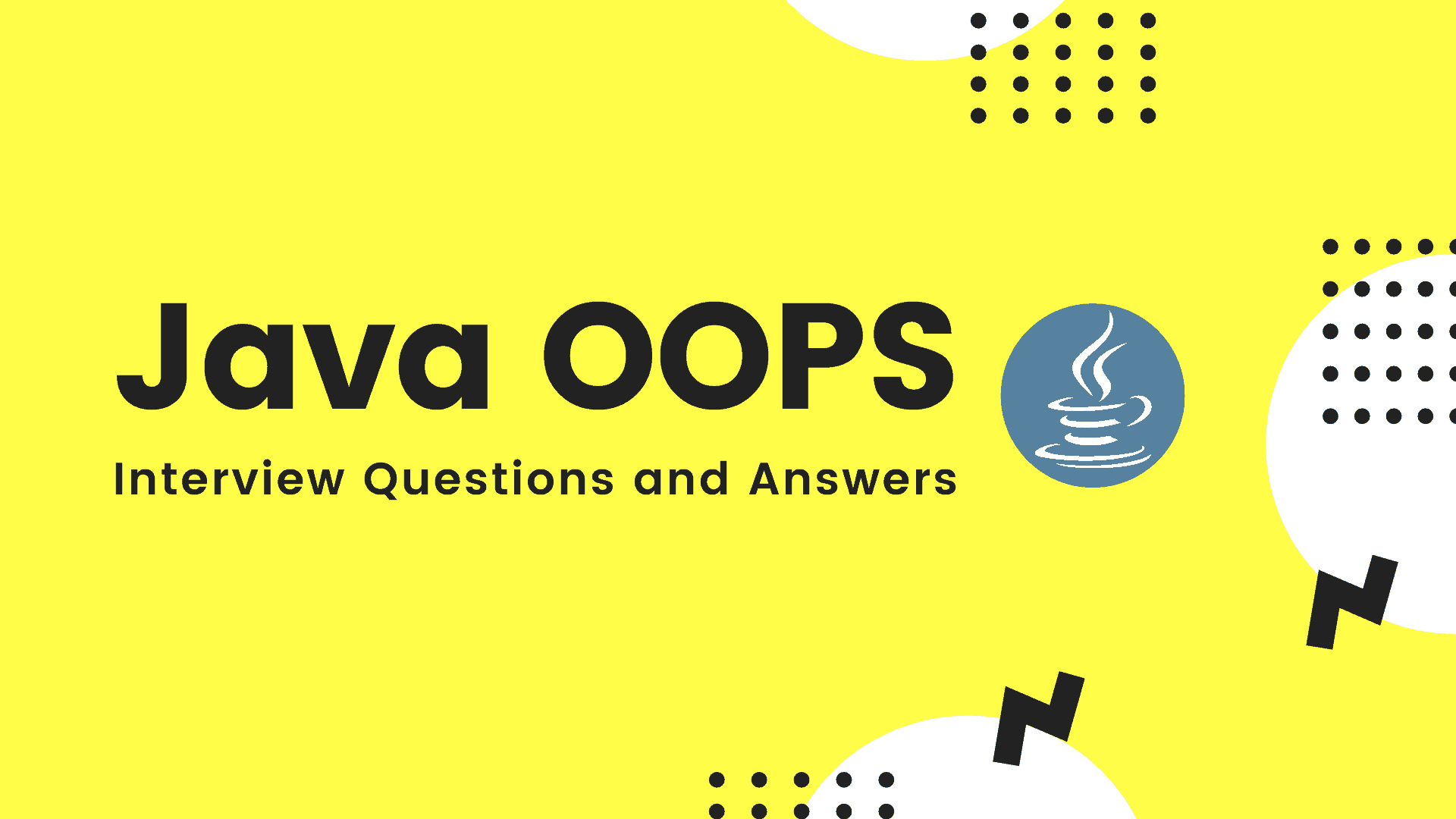 OOPS Interview Questions And Answers 2020 for Beginners/Experienced professionals from Codingcompiler. These OOPS interview questions were asked in various interviews conducted by top multinational companies across the globe. We hope that these interview questions on Java OOPS will help you in cracking your next job interview. All the best and happy learning.

Oops: Object-oriented programming system is a programming paradigm based on the concept of “objects”, which can contain data, in the form of fields, and code, in the form of procedures. A feature of objects is an object’s procedures that can access and often modify the data fields of the object with which they are associated.

OOP provides a clear modular structure for programs which makes it good for defining abstract datatypes where implementation details are hidden and the unit has a clearly defined interface. OOP makes it easy to maintain and modify existing code as new objects can be created with small differences to existing ones.

3) What is class and object in OOPs?

In object-oriented programming , a class is a template definition of the method s and variable s in a particular kind of object . Thus, an object is a specific instance of a class; it contains real values instead of variables. … A class can have subclasses that can inherit all or some of the characteristics of the class.

4) What is polymorphism in OOPs?

Polymorphism is an object-oriented programming concept that refers to the ability of a variable, function or object to take on multiple forms. A language that features polymorphism allows developers to program in the general rather than program in the specific.

5) What are the main features of OOPs?

6) What is data hiding in OOPs?

It helps to reduce the complexity and also improves the maintainability of the system. When combined with the concepts of the Encapsulation and Polymorphism, Abstraction gives more power to the Object oriented programming languages.

An object is a real-world entity which is the basic unit of OOPs for example chair, cat, dog, etc. Different objects have different states or attributes, and behaviors.

A class is a prototype that consists of objects in different states and with different behaviors. It has a number of methods that are common the objects present within that class.

Encapsulation is one of the fundamental concepts in object-oriented programming (OOP). It describes the idea of bundling data and methods that work on that data within one unit, e.g., a class in Java.

This concept is also often used to hide the internal representation, or state, of an object from the outside. This is called information hiding. The general idea of this mechanism is simple. If you have an attribute that is not visible from the outside of an object, and bundle it with methods that provide read or write access to it, then you can hide specific information and control access to the internal state of the object.

Encapsulation is referred to one of the following two notions.

1) Data hiding: A language feature to restrict access to members of an object. For example, private and protected members in C++.

12) Why is OOP better than procedural?

13) What is the difference between class and structure?

Class: A class is a user-defined blueprint or prototype from which objects are created. Basically, a class combines the fields and methods(member function which defines actions) into a single unit.

14) What is the difference between classes and objects?

There is no inheritance for structs as there is for classes. A struct cannot inherit from another struct or class, and it cannot be the base of a class. Structs, however, inherit from the base class Object. A struct can implement interfaces, and it does that exactly as classes do.

16) How can struct be instantiated?

A struct can implement interfaces. A struct cannot be null , and a struct variable cannot be assigned null unless the variable is declared as a nullable value type.

18) Can struct have inheritance?

There is no inheritance for structs as there is for classes. A struct cannot inherit from another struct or class, and it cannot be the base of a class. Structs, however, inherit from the base class Object. A struct can implement interfaces, and it does that exactly as classes do.

19) Can struct have Parameterless constructor?

Structs cannot contain explicit parameterless constructors. Struct members are automatically initialized to their default values. A default (parameter-less) constructor for a struct could set different values than the all-zeroed state which would be unexpected behavior.

20) Can you call the base class method without creating an instance?

Yes, you can call the base class without instantiating it if:

It is a static method

The base class is inherited by some other subclass

22) What are the different types of inheritance?

23) What is hybrid inheritance?

Hybrid inheritance is a combination of multiple and multi-level inheritance.

24) What is multiple inheritance?

A child class inheriting states and behaviors from multiple parent classes is known as multiple inheritance.

25) What is the diamond problem in inheritance?

In case of multiple inheritance, suppose class A has two subclasses B and C, and a class D has two super classes B and C.If a method present in A is overridden by both B and C but not by D then from which class D will inherit that method B or C? This problem is known as diamond problem.

26) Why Java does not support multiple inheritance?

Java was designed to be a simple language and multiple inheritance introduces complexities like diamond problem. Inheriting states or behaviors from two different type of classes is a case which in reality very rare and it can be achieved easily through an object association.

A Java subclass is a class which inherits a method or methods from a Java superclass. A Java class may be either a subclass, a superclass, both, or neither! The Cat class in the following example is the subclass and the Animal class is the superclass.

29) Which class Cannot be a subclass in Java?

30) Can we override static method?

Answer is, No, you can not override static method in Java, though you can declare method with same signature in sub class. … As per Java coding convention, static methods should be accessed by class name rather than object. In short Static method can be overloaded, but can not be overridden in Java.

32) How many types of inheritance are there in Java?

In Java there are three types of inheritance available.

On the basis of class, there can be three types of inheritance in java: single, multilevel and hierarchical. In java programming, multiple and hybrid inheritance is supported through interface only.

33) Can constructor be static?

34) What is static polymorphism?

35) What is dynamic polymorphism?

37) What is Static Binding?

Static Binding: The binding which can be resolved at compile time by compiler is known as static or early binding. Binding of all the static, private and final methods is done at compile-time.

38) What is dynamic binding in Java?

Car is the whole and Wheel is part. Wheel can exist without the Car. Aggregation is a weak association.

Association is a relationship between two objects with multiplicity.

42) What is a constructor in java?

Constructor is a method used to initialize the state of an object, and it gets invoked at the time of object creation. Rules forconstructor are:

Constructor must have no return type.

Manipulators are the functions which can be used in conjunction with the insertion (<<) and extraction (>>) operators on an object. Examples are endl and setw.

Destructor is a method which is automatically called when the object ismade ofscope or destroyed. Destructor name is also same asclass name but with the tilde symbol before the name.

45) What is operator overloading?

Operator overloading is a function where different operators are applied and depends on the arguments. Operator,-,* can be used to pass through the function , and it has their own precedence to execute.

Access modifiers are used to figure out the scope of the method or variables accessible from other various objects or classes.

47) What is an Abstract class in OOP?

48) What is exception handling in OOP?

This is the frequently asked OOP Interview Questions which is asked in an interview. Exception handling is the feature available in most of the object-oriented programming languages which are defined as the process of handling the exceptions during the execution of program flow. The flow of execution should be altered based on the outcome of the exception of aroused. The general blocks of exception handling include try, catch and throw for the most of programming languages like C++, Java etc. In try block the code needs to be executed will be placed and catch block will handle the exception and throw block will return the type of exception and error if it can’t be handled. This is the safest way of handling applications to safeguard the flow of the working application.

49) What is early and late binding?

The compiler performs a process where it matches the function call with the function definition. This is termed as Binding. It can take place during compile time or at runtime. Early binding is also called as Static binding. It means assigning the value to a variable during compile time. Late binding is also called as Dynamic binding; the values to the variables are assigned during runtime.

50) What is a virtual function?

The virtual function makes certain the correct function is called for an object irrespective of the kind of pointer/reference used for the function call. The keyword virtual can be used to implement this function.

51) What is a friend function?

A friend function is a friend of a class that is given access to that class’s public, private and protected data. It cannot access the data if it is defined outside that class. It can be defined anywhere in the class declaration and access control keywords like public, private or protected cannot affect it.

52) What is a ternary operator?

Token, in programming, is a basic component of a code that is recognized by the compiler. Eg. Identifiers, String Literals, Constants & Operators.

Access modifiers are keywords that determine the accessibility of the methods, classes and other members.

What is Machine Learning? – A Complete Beginners Guide on ML

© 2020 - All rights reserved. CodingCompiler.com created with from India.