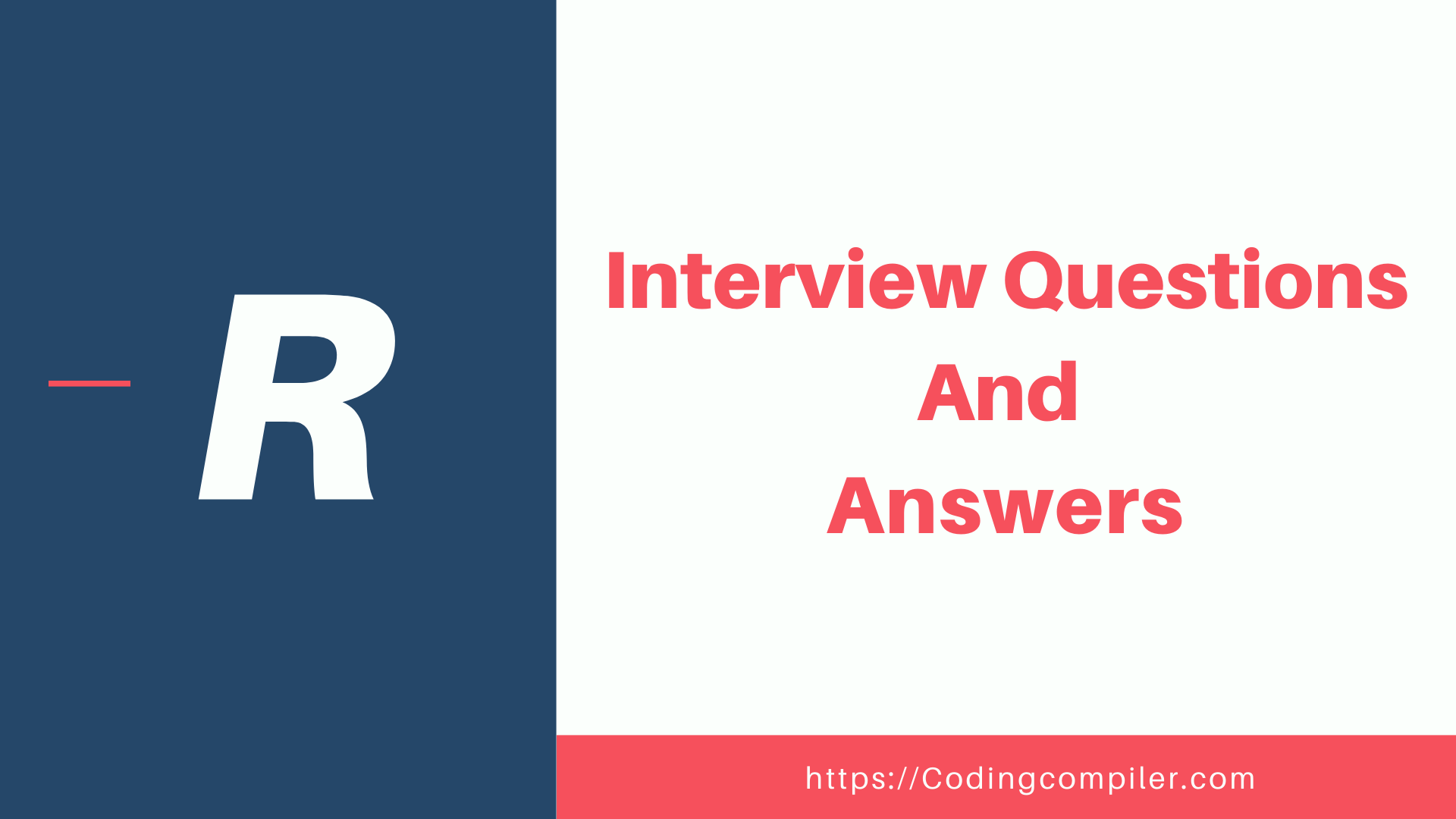 1 What is R?
R is a programming language and free software environment for statistical computing and graphics supported by the R Foundation for Statistical Computing. The R language is widely used among statisticians and data miners for developing statistical software and data analysis.

2 Can you write and explain some of the most common syntax in R?Again, this is an easy—but crucial—one to nail. For the most part, this can be demonstrated through any other code you might write for other R interview questions, but sometimes this is asked as a standalone. Some of the basic syntax for R that’s used most often might include:

# — as in many other languages, # can be used to introduce a line of comments. This tells the compiler not to process the line, so it can be used to make code more readable by reminding future inspectors what blocks of code are intended to do.

“” — quotes operate as one might expect; they denote a string data type in R.

<- — one of the quirks of R, the assignment operator is <- rather than the relatively more familiar use of =. This is an essential thing for those using R to know, so it would be good to display your knowledge of it if the question comes up.

3 What are some basic operations that can be used in R?

4 Explain the data import in R language.
R provides to import data in R language. To begin with the R commander GUI, user should type the commands in the command Rcmdr into the console. Data can be imported in R language in 3 ways such as:

6 What is the main difference between an Array and a matrix?
A matrix is always two dimensional as it has only rows and columns. But an array can be of any number of dimensions and each dimension is a matrix. For example a 3x3x2 array represents 2 matrices each of dimension 3×3.

9. Which function in R language is used to find out whether the means of 2 groups are equal to each other or not?
t.tests ()

For the above code snippet, we obtain the output as 39.

13. How Do You Solve a Problem in R?
The solutions available are referred to as “packages” in R, so be sure to use this term in your answer. First, explain that the CRAN package ecosystem has an extensive amount of packages available (over 6,000) to solve potential issues. Each R user might have their own way of making their selection, but the best way to answer this question is to explain how reviews from others go a long way: Were other R users with similar issues able to solve their problems with a particular package? If so, were these issues similar to the problems you’re encountering? In your answer, explain that you’d be wary of packages that don’t encompass good software development principles, have poor reviews, or are lacking reviews altogether.

14. What Objects Do You Use Most Often in R?
Your interviewer wants to get a sense of how experienced you are in R programming with this question. Be prepared by knowing, in detail, some of your recent work and explain your most frequently used objects, while also explaining how and why you use them.

15. What Are Some of Your Favorite R Programming Functions?

If you’re interviewing for a job in R programming, it’s not just important that you understand and know R inside and out, but that you’re passionate about it, too. Your interviewer should expect that as an expert in R, you’ll not only be able to easily come up with functions on the spot but that you can easily name the ones you like the most (and why). Be sure to answer this question with confidence and enthusiasm.

17. Who and what are the uses of R software environment?
The statistical programming language is widely used amongst data miners and statistics analysts for the development of data analysis and statistical software respectively.

18. Explain the evolution of the language R.
R is an application of the S programming language with lexical scoping semantics encouraged by Scheme. This computing program was created by Mr. Ross Ihaka and Mr. Robert Gentleman at Auckland University, New Zealand. The language is named “R” after the first names of the authors. Although the project was initiated in the year 1992, its first version was released in 1995 and a stable version after half a decade (2000) respectively.

19. Two vectors X and Y are characterized as pursues – X <-c(3, 2, 4) and Y <-c(1, 2). What will be a yield of vector Z that is characterized as Z <-X*Y.
In R dialect when the vectors have distinctive lengths, the duplication starts with the littler vector and proceeds till every one of the components in the bigger vector have been increased.

21. Name the various components of the grammar of graphics?

The different components of the grammar of graphics are:

To install a package in R, you have to write this command:
install.packages(“<package_name>”)

23. What is Rmarkdown?
RMarkdown is R’s reporting tool. It allows you to create high-quality reports of R code.

There are three types of output format of Rmarkdown:

24. What are the R packages used for data imputation?

The R packages most commonly used for data imputation are:

In R, a confusion matrix is used to assess the accuracy of a developed model. It offers a cross-tabulation calculation of observed and predicted classes by using the “confusionmatrix()” function contained within the “caTools” package.

26. What is the difference between a matrix and a dataframe?
A dataframe can contain heterogenous inputs and a matrix cannot. (You can have a dataframe of characters, integers, and even other dataframes, but you can’t do that with a matrix — a matrix must be all the same type.)

The differences are the following:

apply(): Use as an alternative to for() loop
lapply(): Applies function to every item and returns the result as a list
sapply(): function will be executed column wise
tapply(): Similar to aggregate() function

30. Are the following code snippets same or different? Explain why to support your response.

These are NOT same. Flights_mutate1 will perform appropriately. Where as

flights_mutate2 will throw an error. We can not use select because the derived variables “speed” does not exist. It has to be created first using mutate() function and then select() function can be used to extract specific variables from the data frame.

31. How to determine data type of an object?

To determine structure of an object, use str() function :

32. Which data structure is used to store categorical variables?

R has a special data structure called “factor” to store categorical variables. It tells R that a variable is nominal or ordinal by making it a factor.

33. Give an example usage of tapply() method

The function tapply() applies a function ‘mean()’ to first argument ‘marks’, which is grouped by second argument ‘students’

34. How to modify and construct lists? Show with an example.

36. How to write your own functions?

A function in R can be written as follows:
> function_name <- function(arg1, arg2, . . . ) expression_in_R
expression_in_R is usually a set of different expressions clubbed together.

Loading a .csv file in R is quite easy. All you need to do is use the “read.csv()” function and specify the path of the file.
house<-read.csv(“C://house.csv”)

38. Write code to accomplish a task?

Answer) In just about an interview for a position that involves coding, companies will ask you to accomplish a specific task by actually writing code. Facebook and Google both do as much. Because it’s difficult to predict what task an interviewer will set you to, just be prepared to write “whiteboard code” on the fly

39. What are some of your favorite functions in R?

Answer) As a user of R, you should be able to come up with some functions on the spot and describe them. Functions that save time and, as a result, the money will always be something an interviewer likes to hear about.

40. What is a factor variable, and why would you use one?