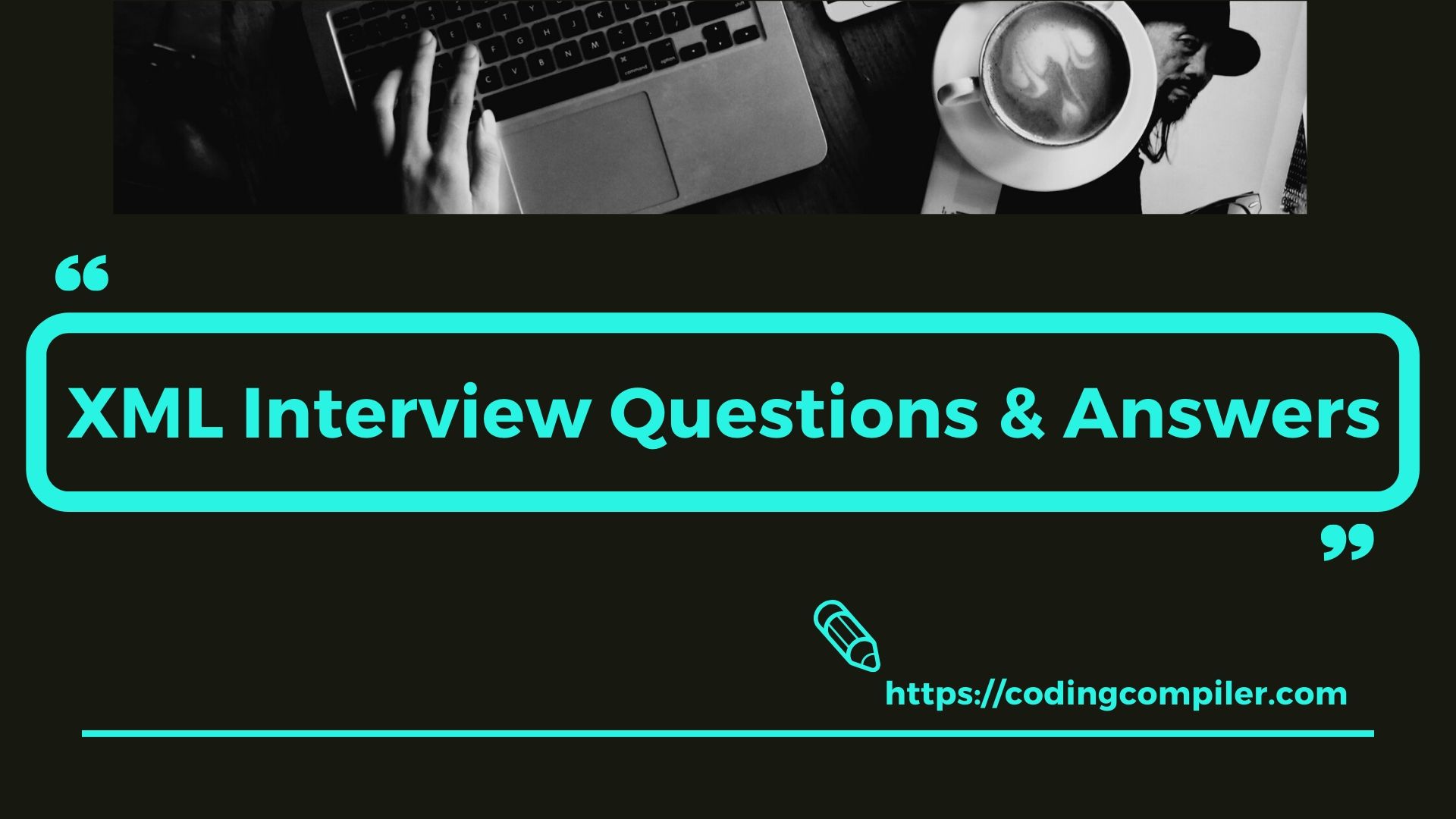 XML Interview Questions And Answers for experienced professionals from Codingcompiler. These XML interview questions were asked in various interviews conducted by top multinational companies across the globe. We hope that these interview questions on XML will help you in cracking your job interview. All the best and happy learning.

In this XML Interview Questions Blog, You Will Learn

XML technology facilitates you to create your own markup language.

2. What is the meaning of the version in XML?

Answer: Version is a tag used to show which version of XML is used.

DOM stands for Document Object Model which is used to describe the logical structure of XML document. It is a hierarchical model that provides a way to access and manipulate an XML document.

DOM methods and objects can be used with any languages like C#, VB, JavaScript and VB Script.

4. Difference between DTD and XML Schema?

Answer: There are a couple of differences between DTD and XML Schema e.g. DTD is not written using XML while XML schema is XML documents in itself, which means existing XML tools like XML parsers can be used to work with XML schema. Also, an XML schema is designed after DTD and it offers more types to map different types of data in XML documents. On the other hand, DTD stands for Document Type definition and was a legacy way to define the structure of XML documents.

Answer : XSLT is another popular XML technology to transform one XML file to other XML, HTML or any other format. XSLT is like a language which specifies its own syntax, functions and operator to transform XML documents. Usually transformation is done by XSLT Engine which reads instruction written using XSLT syntax in XML style sheets or XSL files. XSLT also makes extensive use of recursion to perform the transformation. One of the popular examples of using XSLT is for displaying data present in XML files as HTML pages. XSLT is also very handy to transforming one XML file into another XML document.

6. What is the meaning of well-formed XML?

Answer: Another interesting XML interview question that most appeared in telephonic interviews. A well-formed XML means an XML document that is syntactically correct e.g. it has a root element, all open tags are closed properly, attributes are in quotes, etc.  If an XML is not well-formed, it may not be processed and parsed correctly by various XML parsers.

7. What is a valid XML document?

Answer: A structurally correct element is called a valid XML document. It should follow some predefined rules of a specific type of document. These rules determine the type of data that each part of the document can contain. These rules can be written by the author of an XML document or someone other.

8. Can XML be used for multimedia purposes?

Answer: Yes, XML can be used for multimedia purposes by using SVG and SMIL.

9. What does SVG stand for and what is it used for?

Answer: SVG stands for Scalable Vector Graphics. It is an XML language that is used to display animations, images, graphics, and 2D from the XML code. Vector mathematical formulas are used here to render the content.

Answer: Xlink used in XML files, are the standard way of creating hyperlinks in XML files.

12. What is the relation of SOAP with XML?

Answer: SOAP uses XML to define a protocol for the exchange of information in distributed computing environments.

13.  What are the three components in SOAP?

Answer: It consists of an envelope, a set of encoding rules, and a convention for representing remote procedure calls.

Answer: CDATA stands for character data. Characters like ‘<’ and ‘>’ are not allowed in XML. CDATA starts with <! CDATA [“and end with”]>. CDATA is an unparsed character data that cannot be parsed by the XML parser.

Answer: Diffgram is an XML format that is used to find the current and original versions of the XML document.

16. Why has XML been used for development?

There are several reasons for using XML for development such as:

18. How to connect XML with the database?

Answer: XML import and export modules are used to connect XML applications with databases. There has to be a 1:1 match between the field name of element type and the database table in DTD or XML schema. While in some cases little programming is required to establish the desired match.

Answer: SGML, a generalized markup language, is both powerful and large. It can be used for defining the structural descriptions of the different electronic documents.

Answer: CDATA is also known as character data that is unparsed or non-validated. To validate, it can be parsed using XML parser.

The illegal Character in XML are < and >

21. What are well-formed XML documents?

22. What is a markup language?

Markup languages are designed for presentation of the text in different formats, and

it can also be used for transporting and storing data.

This markup language specifies the code for formatting, layout, and style of data. This markup code is called Tag.

XML is a simple and flexible markup language in the text format.

Not quite; SGML is the mother tongue, and has been used for describing thousands of different document types in many fields of human activity, from transcriptions of ancient Irish manuscripts to the technical documentation for stealth bombers, and from patients’ clinical records to musical notation. SGML is very large and complex, however, and probably overkill for most common office desktop applications.

XML is an abbreviated version of SGML, to make it easier to use over the Web, easier for you to define your own document types, and easier for programmers to write programs to handle them. It omits all the complex and less-used options of SGML in return for the benefits of being easier to write applications for, easier to understand, and more suited to delivery and interoperability over the Web. But it is still SGML, and XML files may still be processed in the same way as any other SGML file (see the question on XML software).

HTML is just one of many SGML or XML applications—the one most frequently used on the Web. Technical readers may find it more useful to think of XML as being SGML– rather than HTML++.

24. Who Is Responsible For Xml?

XML is a project of the World Wide Web Consortium (W3C), and the development of the specification is supervised by an XML Working Group. A Special Interest Group of co-opted contributors and experts from various fields contributed comments and reviews by email.

XML is a public format: it is not a proprietary development of any company, although the membership of the WG and the SIG represented companies as well as research and academic institutions.

25. Can You Walk Us Through The Steps Necessary To Parse Xml Documents?

Superficially, this is a fairly basic question. However, the point is not to determine whether candidates understand the concept of a parser but rather have them walk through the process of parsing XML documents step-by-step. Determining whether a non-validating or validating parser is needed, choosing the appropriate parser, and handling errors are all important aspects to this process that should be included in the candidate’s response.

26. Give Some Examples Of Xml Dtds Or Schemas That You Have Worked With?

Although XML does not require data to be validated against a DTD, many of the benefits of using the technology are derived from being able to validate XML documents against business or technical architecture rules. Polling for the list of DTDs that developers have worked with provides insight to their general exposure to the technology. The ideal candidate will have knowledge of several of the commonly used DTDs such as FpML, DocBook, HRML, and RDF, as well as experience designing a custom DTD for a particular project where no standard existed.

27. What is a Complex Element?

A complex element is an XML element that contains other elements and/or attributes.

There are four kinds of complex elements:

However, the text can be of many different types and may have various restrictions applied to it

29. What are the ways to use namespaces?

Answer: There are two ways to use namespaces:
1. Declare a default namespace
2. Associate a prefix with a namespace, then use the prefix in the XML to refer to the namespace

30. How are white-spaces handled by xml?

1. Insignificant white-space : Those whites-paces that are found between structural elements and are passed by the parser as they are to the application without any effect ( suppressed) are the insignificant spaces. A good example of such white-spaces are the spaces given in an html document.

31.  What are the different scenarios under which an xml schema may be used?

The xml schema may be used in case the user wants to have the following requirements:

1. The xml schema can be used when the user requires the information to be included in the document is correct and in a consistent format.

2. It can be used when the user has to create a large set of xml documents with all the documents following a common structure.

3. When the document structure is to be shared with other users if an application is built and it follows a particular file structure.

4. Schema in xml are particularly helpful if the xml documents are going to contain a large amount of data. The schema gives the user the flexibility to define the structure according to his requirements.

32. What are the disadvantages of using XML?

Parsing XML refers to going through XML document to access data or to modify data in one or other way.

You should use a DOM parser when −
You need to know a lot about the structure of a document
You need to move parts of the document around (you might want to sort certain elements, for example)
You need to use the information in the document more than once

35. What are the key components/interfaces of DOM Parsing?

The DOM defines several Java interfaces. Here are the most common interfaces −

Node – The base datatype of the DOM.
Element – The vast majority of the objects you’ll deal with are Elements.
Attr Represents an attribute of an element.
Text The actual content of an Element or Attr.
Document Represents the entire XML document. A Document object is often referred to as a DOM tree.

37. Can we create an XML document using SAX parser?

No! Using SAX parser, we can only parse or modify a XML document.